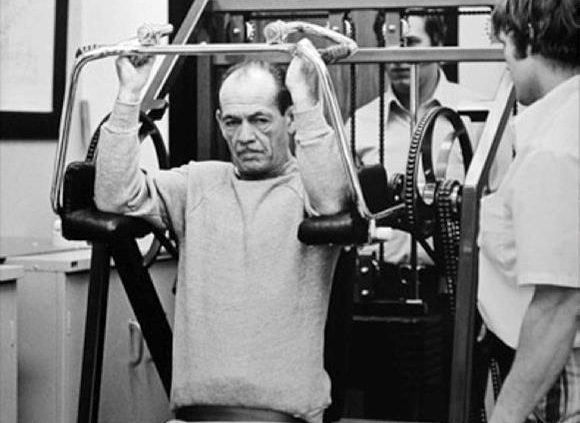 Arthur Jones was the inventor of the Nautilus and MedX gym equipment and the man who developed one of the world’s most effective training methods, henceforth called the HIT training method.

Who was Arthur Jones?

Jones’ ideas sought to change the perception of bodybuilding and strength training from Arnold Schwarzenegger’s training methods and programs, which included hours of gym training daily up to six times a week, to high-intensity training that lasted only a few minutes per workout. Yes, most often, if the warm-up is not included, the entire actual HIT training takes 6-15 minutes.

The High Intensity training method involves short individual sets where each set is performed to complete muscle activity once or up to twice a week to maximize muscle growth and increase strength.

Among Jones’s publications are also the English-language Nautilus Bulletins books, which debunked modern myths about exercises and training plans. By the way, the books in question are available on Amazon.

Other publications included the results of Jones’ studies of the reactions of various muscle structures exposed to varying loads in a restricted and unrestricted range of motion. Jones named these responses the specific S-type responses and the general G-type responses. He was among the first researchers to experiment with eccentric training exclusively in subjects, and among the first to point out the superiority and importance of eccentric training in increasing strength. He was the inventor of infimetric and akinetic training devices. He was the first gym equipment designer to use eccentrics instead of pulleys in his equipment, which for the first time provided resistance that varied according to the force curves created by the human muscle structure. In short, the movement became heavier at the point when the power output was at its highest.

The advent of Nautilus machines made gym training more appealing to the public, fueling the gym boom of the 1970s and 80s, which led to the spread of Nautilus gyms across the United States.

The Nautilus machines and the company he founded to sell them made Jones a multimillionaire and put him on the Forbes 400 richest people list. At one-point, financial analysts estimated that Nautilus would earn $400 million a year. He sold Nautilus Inc. for $23 million in 1986. He also sold MedX Corporation in 1996 and then retired.

On August 28, 2007, Jones died of natural causes at the age of 80 at his home in Ocala, Florida. He is survived by two daughters and two sons, Gary and William Edgar Jones. Gary Jones created Hammer Strength weight training machines.

Are you interested in going back in time and experiencing Nautilus’ first-generation machines? You can try and test them at Tallinn’s HC GYM gyms. In addition to Nautilus machines, Arthur developed uncompromising gym equipment from the MedX series. Med X – gym equipment can be found at the HC GYM club at tartu mnt 87 d Tallinn on the ground floor of the Peugeot building opposite Prisma.

Barbell and weights and dumbbells – Strength training with free weigh...
Scroll to top